Presentation is the edifice of anything to be inspiring and attractive and this rule is no exception when it comes to determining the grace and personality appeal in terms of style statement, intention and  desire. No matter how modish and trendy you may be through your attire; if you  lack the elegance  of a confident  body language, then all that invested effort certainly does go down the drain. Your posture, body gestures and body language silently speak of your personality and account a great deal for the attraction which you may have in you.

So don’t just focus on the hefty fiscal spending on your shopping sprees but also concentrate on your body language that provides you with the confidence of attitude that really makes your personality matter. A great example to cite is that of the celebrities who have that appeal of stance and body language which makes them so inspiring for us that we tend to emulate their every trait of individuality. It helps not only in projecting a fabulous smart groomed look but also tends to convey your actions and intentions with every slight movement you make. 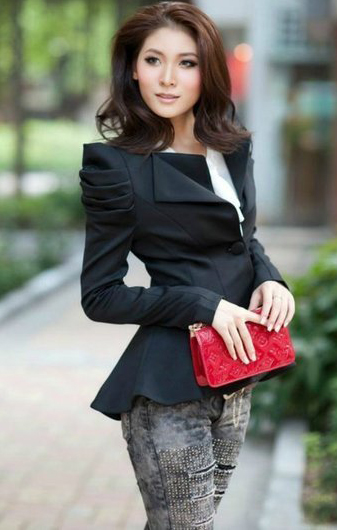 Body language has significance not only with respect to your own physical looks and personality appeal but is highly essential for your  habits and actions for your formal interactions in public and professional life. It basically  has three significant points that should be worked on and aimed at perfecting; which include  composed stance of posture while standing, walking and sitting. These three poses are what the public sees and  tend to rule out the impression of your personality in the eyes of others.

Self improvement is not only about honing and regularly trimming your habits, thoughts and actions but also a great deal about the overall  personality out of which body language is also a factor that needs a great deal of homework in majority of people. Foremost, let’s consider the how you should be and what you can do to make it better. The punch line of personality appeal through body language and body gestures is having an erect body posture while standing  with the head held high and straight. Drop your shoulders  and slightly push your chest out for a confident pose that enhances the overall appeal in your appearance because  a hunched posture is the biggest threat to a ‘good looking you’.

Your manner of walking is another factor worth the attention and this aspect of body language has many flaws which are common among many people.  Medium pace with straight feet  without bending your knees while walking is the most desirable impression while you’re on the move. Having squinted feet and sloppy walk with bending knees, parted legs and short quick pace are killers of a good personality. A raised head and control over the spinal cord will enable you to  carry yourself high and can also help eliminate this distorted treading style. For those females who were high heels, such sloppy stance of motion will serve the opposite results of the word ‘graceful’ in personality appeal . Standing in front of the mirror you can always work on the areas of body gestures which you know are the  bad ones and try to work on them through exercises.

Body language also holds significance in your social sphere of interactions whereby your manners of body gestures and method of self-presentation matters. Usually people have a habit of making involuntary actions such as excessive blinking, rolling of eyes here and there and also using their hands a lot. These are traits of body gestures and actions which tend to be ridiculing your personality appeal.  They can be a cause of great embarrassment too when you really over do it. Adhering to less  facial  and hand movements are the strong traits of a confident and good personality through this epic personality ordeal of  gaining appeal and self confidence to know that you have a standing amidst others because the lacking in your posture can also be a factor that leads you to insecurity and shyness in public.  Here again practice before the mirror and the  deliberate effort to control it is the key to overcoming this personality flaw.

Body language traits that matter when it comes to an appealing, self-confident and strong physical personality.